(I specifically to dwell and then are put on, because their construction properties have so much that I'm afraid anything simply forget them, I'll highlight a single lesson)

And so let's start:

To begin, think, for what purpose we need it? We will unlock the recipes? Or improve anything? Because the technology is a little different in these cases.

Here are the codes from API.

Now let's try to make themselves the technology our casks from past examples.

To start with "zablokirvoat'" all of our recipes have barrels that each recipe add line: enabled = false or enabled = "false" no difference.

Then create a file Tehnology.lua

It prescribes the data: extend ({})

And go in the game. 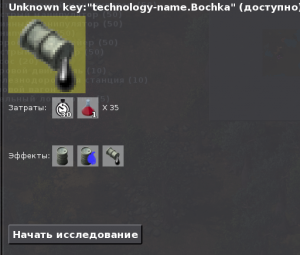 The technology works, recipes for not previously available.

For another, this section can be called: "Updating fashion."

After all, the first time it is not possible to do so, it eventually, right? Therefore, it can often be that recipes items will vary. But how about those phones where the recipes already researched? There they will remain the same though you tresni (Game Technology and researched recipes stores separately, to simplify loading and saving memory).

Consider the very real situation: when we realized that the balance is disturbed.

Suppose you needed a barrel for water from 10 iron is expensive. So we are changing in her recipe for 9. But going on our map where we play for several Zilionov or bromilionov hours we find that barrel all the same kraftitsja of iron 10. We think we can do something wrong saw and open the list of technologies. But there, too, the recipe will be giving out 10 sheets. What-do we do?

Create in the root of fashion folder migrations.

This file does not need to connect!

This file is activated then, and only then when you go to the map of the old version. He Rewrites this card under the version of our fashion and activates the file.

Most often it will write here it is:

This updates all recipes and all the technology.

Now go to the info. json and there change to 0.1.1 to 0.1.2 and pereimenovyvaem folder the same way fashion

Finish! The mod has been updated!

Of course for the more advanced, I advise to use this file as a one-time script and if you wish you can shove and conditions and commands.

The whole game though and looks single, in fact it's split into contact layers.

For example, a layer of water and a layer of buildings. After all, no building could be placed on water right?

Notice that the 2 layers are at level 1?  Layer the character is not used by anything except character, although it is equivalent to the layers of objects.

All this while and not particularly important, but gives space to create interesting pieces for some. For example when I dabbled with these settings I created something like Blocks "bridge" that stavjat'sja the water but allow you to put anything over them. Or for example I created a "fish farm" which depend only on the water.