Oh man. It really has been a year since I started this project. Can’t quite believe it’s already been a year, while also not quite believing the project carried on for a whole year. In the beginning, it was just a silly idea that I wanted to try out and see where it would go, not really expecting it to become an actual project with dozens of people regularly contributing. It would have likely faded after a few weeks without tons of people stepping up and contributing. But (at least in this reality) it didn’t, which I’m very happy about and grateful for.

Conor_ will thank the core team below, but I want to say thanks to everyone that contributed to the project. You’ve all been such a joy to work with. Thanks to the people contributing articles for presenting your passion projects and being so receptive to feedback, without you guys there’d be no project at all. Thanks also to the translators for working tirelessly on the various translations so more people can enjoy the project, and for putting up with the occasionally chaotic release schedule. Finally, thanks to the techies (especially MagPie) for fulfilling our every request concerning the website.

One year of Alt-F4 Conor_

Goddamn. One full year of Alt-F4. 45 releases across the last 52 weeks, each and every one celebrating the awesome community around Factorio. From SPIDERTRON!! to Space Exploration, from Belt-Based Chaos to other more different Belt-Based Chaos. Between all the contributors, we’ve written over 100,000 words, quite the accomplishment in my book.

None of this would’ve been possible without the awesome team behind Alt-F4. A special thank you is needed to stringweasel for going out and finding interesting people to contribute to Alt-F4, then guiding them through the writing process to produce well-refined articles. Another thank you is needed for Nano who’s fact checking our releases each week to make sure every obscure link and dumb joke goes where its supposed to, and of course his input in guiding the editorial direction of Alt-F4. And finally, a thank you to Firerazer for his hard working managing the translations efforts of Alt-F4.

One of the most fun parts each week for me comes on Thursday when we have to select the title and thumbnail for that week’s release. This is the time the editing team get to be creative and make something fun and interesting to surround that week’s submission. The title and thumbnail are what people see to intrigue them into reading the submission that was so carefully put together by the contributor, so we think its super important to get it right. Nano and stringweasel are usually taking the lead on design of the thumbnail, pouring their memes and dreams into their creations. Below, I’ve created a collage of all the thumbnails up to this point to show them off in all their glory. If any happen to intrigue you, feel free to click on through to that weeks article, I can assure you it’ll be good!

The Future of Alt-F4

The reality of the Alt-F4 project from the very begining has been (to quote the one and only Therenas) We Need You!. Without the army of contributors beavering away on submissions, Alt-F4 won’t be able to keep going. This does unfortunately mean that some day, Alt-F4 will end. I hope that day is not soon, and to avoid it coming sooner, we need people to keep on finding cool stuff to write about. It doesn’t matter if you’re bad at writing or haven’t fully fleshed out the idea. We have a team of people dedicated to helping guide you through the writing process. If you have an idea, join our Discord and get to work!

So as long as people keep writing awesome submissions, the editing and technical teams will keep on working to make them the best they can be, continuing this awesome project. Thank you all for reading, contributing, and giving feedback!

After a year of all this, stringweasel thought it would be fun to do a bit of a comparison between Alt-F4 and the FFF. So, with pocarski’s help, we put together a  gear cloud, with one half dedicated to either project. There’s not much to say about it, half the fun is trying to find funny expressions hiding inside the cloud, so have fun! 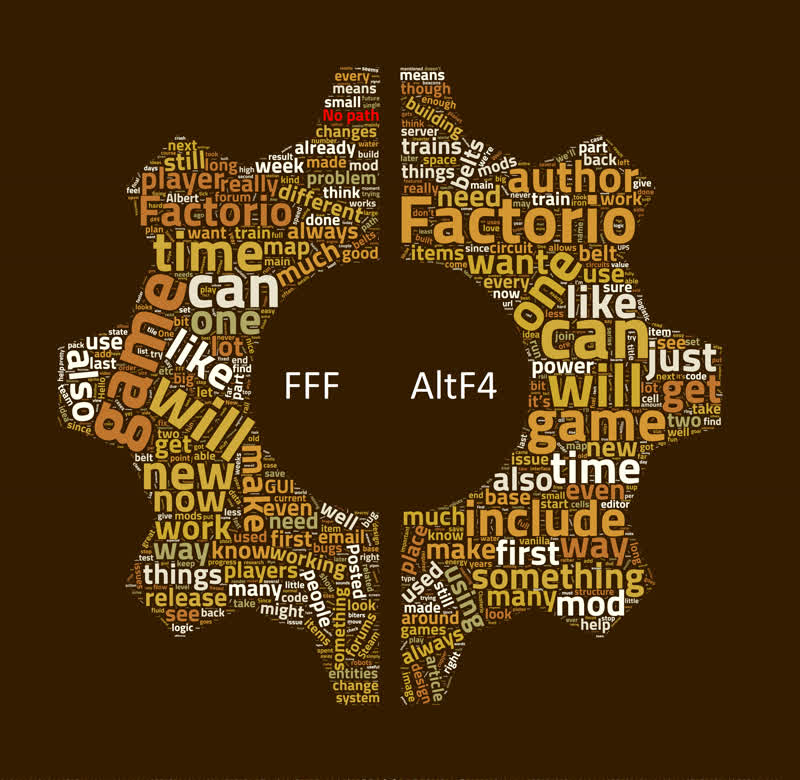 One interesting factoid that came out of this is that Alt-F4 contributors have already written over 100k words in only 45 issues, compared to the FFF which has 350k words over 366 issues. Turns out we’ve been quite busy!

As part of Alt-F4’s anniversary celebration, we would like to announce our new Alt-F4 public server! This time we will be playing the new Satisfactorio mod. If you haven’t heard of this new and amazing mod then you can read this great article by the author Niet, who will also be joining us on this quest!

To join the server simply search for Alt-F4 Community Server – Satisfactorio in Multiplayer; anyone is welcome to join. Help us build a larger turbo-motors factory than anyone before, and herd all the Lizard Doggos we can find!