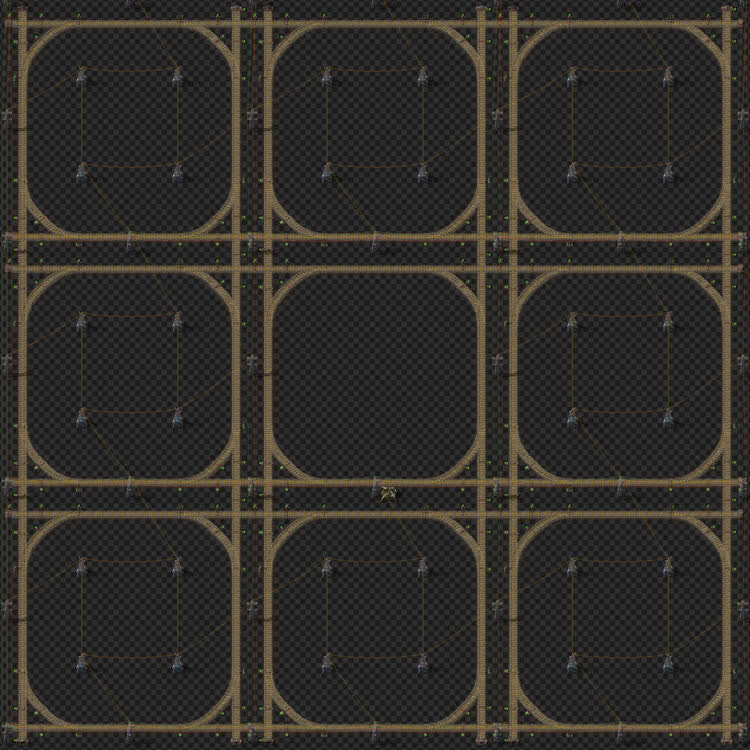 This fine week in March, first-time contributor Ph.X talks about their very compartmentalized system for laying out a base using isolated modules and connecting them through a Logistic Train Network. Taking inspiration from software development and the lessons learned there, Ph.X uses the concepts of Modular Programming to their advantage.

Also, in other news, we now offer an email list that you can subscribe to! If you don’t browse reddit or the forums or even our Discord regularly, we now offer the option of the ever-popular concept of an email list. Just enter your email here and you’ll be notified every Friday on release of the newest issue. We will of course only ever use this for Alt-F4 posts, and not spam you with irrelevant crap.

Factorio has a complex network of production lines (i.e. spaghetti) that make the game fun and challenging. It’s a complex engineering problem with similar challenges to software engineering, so I think it is worthwhile to use some real-life experience to improve the game experience.

Like most philosophies, ROFL tries to find one timeless Arche as the origin of everything; In our case, we choose the recipe. Red circuits can be crafted by an assembly machine of any tier, which may be affected by different modules, and the required raw materials may come from a belt, a logistics chest, or even an adjacent copper wire assembly machine, but no matter how other conditions may change, the recipe itself keeps being copper wires, electronic circuits with plastic bars to the advanced circuit. The recipe is kind of an atomic operation in Factorio: an indivisible unit, as it can’t be broken down further.

Based on a certain recipe, a dedicated subfactory is packaged into a module. A separate logistics system is used to fetch raw materials and ditch products for the modules, as the interface for external interaction of the module. The purpose of this division is to achieve high cohesion inside the modules and low coupling between the modules. High cohesion inside the module meaning the module contains all the facilities (assemble machines, inserters, belts, power poles, beacons, etc.) needed to make the recipe so it can work independently. Low coupling between the modules meaning modules interact with each other through predefined interfaces (ie. power and rail grids) without direct dependencies, making them interchangeable.

To better implement this idea, the LTN – Logistic Train Network, AAI Containers & Warehouses and Miniloader mods are being used in the following examples. The blueprints for all the examples below can be downloaded here.

Before actually building any subfactory modules, we need to design a universal logistics network as the interface between the modules. Although a main bus or logistic robots can be implemented as such a logistics system to some extent, a city-block rail grid far exceeds other solutions in terms of throughput, reusability, and plain coolness.

In vanilla, trains can only run on a predetermined schedule, which is not very flexible and “logistical”. This is where the Logistic Train Network comes in handy. With LTN, trains are parked in depot stations, just like logistic robots are parked in roboports. When there is a logistic demand, the system will find a suitable train at the depot and generate a schedule for it to fetch the specified items at the provider station, then go to the requester station for unloading, then return to a depot station, similar again to the behaviour of a logistic robot. But unlike logistic robots, the trains do not load or unload themselves, so inserters or loaders at the stations are needed. LTN is more powerful than a logistic robot network because of the huge cargo capacity, high speed, and support for fluid transports.

The chosen rail grid in my example is a two-way left-hand drive railroad, which allows me to place the rail signals in between the rails. Junctions are straight and left turn only for space-saving. Most stations have a train stop limit of two to ensure that a maximum of one train waits outside the station. Sections occupied by a handful of trains waiting outside the stations can be detoured through the fully interconnected grid.

The modules are kept at a grid distance from each other, where the grids between the modules are used for train traffic management, solar power generation, and robot logistics networks separation. Robots excel in short-distance logistics but are terrible at long-distance transportation. A separated logistics network can prevent robots from being involved in unnecessary long-distance flights because that part of the job belongs to trains.

The smallest two-car trains with one locomotive and one cargo/fluid wagon were chosen to reduce the size and eliminate the need to balance loading and unloading between wagons. Fuel replenishment for the locomotives happens in the LTN depot stations where trains return after each delivery.

Since the inputs and outputs within this module are fulfilled by trains, our modification and upgrade of the production line within the module will not affect other modules. So, we could change it into a fully beaconed setup for gears without changing anything else about the factory.

Next, let‘s look at an advanced circuit module with three types of raw materials. By setting the logistic train stop to request multiple ingredients, we are able to unload all of our raw materials at a single station. At this point all the raw materials are mixed in one warehouse, we then use filter miniloaders (similar to filter inserters) to separate each material onto a separate belt to supply the assembly machines.

The same works for recipes that produce/consume fluids if we use a fluid wagon instead.

There are also some unconventional recipes, such as research, a steam power plant, and the rocket silo.

Pros and Cons of ROFL

ROFL is aimed at engineering-minded people, making it easy for players to divide and conquer production problems. When you need to implement a certain recipe, simply set up input and output stations in the grid that match the types of raw materials and products, and then design production lines between the stations. When the capacity of a recipe is insufficient, you can directly copy and paste the corresponding factory module and integrate it into the whole factory production without plumbing up the inputs and outputs.

ROFL is not optimized towards perfect production, as it is not a perfect-ratio production line, so it’s common that structures stop working because of insufficient raw materials or product overflow. Each item has to be loaded to and unloaded from a wagon, adding a lot of input and output bottlenecks, most typically in copper wire, where the number of products exceeds the number of raw materials and the number of stacks is high while the demand is huge. There is a very significant stockpile for every cell because of the warehouses, which does not help you identify the items with insufficient production in time (definitely iron ore though). The rail network used for inter-module logistics in the factory is expensive to build and also poses a large number of traffic accident hazards (praise the Spidertron).

ROFL is more of a way of thinking that tries to simplify complex problems rather than a blueprint book. The examples above are just one solution that uses ROFL as a guide. Using LTN to build a rail grid may be considered a bit cheaty by some, but this idea can also be used for main bus gameplay and more. There will never be one “correct” way to play Factorio, the variety is what makes it awesome.